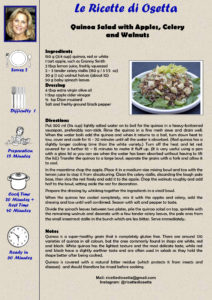 Put 300 ml (1¼ cup) lightly salted water on to boil for the quinoa in a heavy-bottomed saucepan, preferably non-stick. Rinse the quinoa in a fine mesh sieve and drain well. When the water boils add the quinoa and when it returns to a boil, turn down heat to low, cover and cook for 15 – 20 minutes until all the water is absorbed. (Red quinoa has a slightly longer cooking time than the white variety.) Turn off the heat and let rest covered for a further 10 – 15 minutes to make it fluff up. (It is very useful using a pan with a glass lid so you can see when the water has been absorbed without having to lift the lid.) Transfer the quinoa to a large bowl, separate the grains with a fork and allow it to cool. In the meantime chop the apple. Place it in a medium-size mixing bowl and toss with the lemon juice to stop it from discolouring. Clean the celery stalks, discarding the tough pale base, then slice the rest finely and add it to the apple. Chop the walnuts roughly and add half to the bowl, setting aside the rest for decoration. Prepare the dressing by whisking together the ingredients in a small bowl. When the quinoa has cooled completely, mix it with the apples and celery, add the dressing and toss until well combined. Season with salt and pepper to taste. Divide the spinach leaves between two plates, pile the quinoa salad on top, sprinkle with the remaining walnuts and decorate with a few tender celery leaves, the pale ones from the small innermost stalks in the bunch which are less bitter. Serve immediately.

Quinoa is a super-healthy grain that is completely gluten free. There are around 120 varieties of quinoa in all colours, but the ones commonly found in shops are white, red and black. White quinoa has the lightest texture and the most delicate taste, while red and black have a slightly earthier taste and are often used in salads as they hold the shape better after being cooked. Quinoa is covered with a natural bitter residue (which protects it from insects and diseases) and should therefore be rinsed before cooking.

This website uses cookies to improve your experience while you navigate through the website. Out of these, the cookies that are categorized as necessary are stored on your browser as they are essential for the working of basic functionalities of the website. We also use third-party cookies that help us analyze and understand how you use this website. These cookies will be stored in your browser only with your consent. You also have the option to opt-out of these cookies. But opting out of some of these cookies may affect your browsing experience.
Necessary Sempre abilitato
Necessary cookies are absolutely essential for the website to function properly. This category only includes cookies that ensures basic functionalities and security features of the website. These cookies do not store any personal information.
Non-necessary
Any cookies that may not be particularly necessary for the website to function and is used specifically to collect user personal data via analytics, ads, other embedded contents are termed as non-necessary cookies. It is mandatory to procure user consent prior to running these cookies on your website.
ACCETTA E SALVA